Glacial Erratics and Eskers in the Township of Lanark Highlands, Lanark County, Ontario

About 79 thousand years ago the Wisconsin ice age started, glaciers formed, advanced and retreated, and at their maximum extent covered most of Canada and extended down into the United States. Lanark County was covered by a glacier two kilometers in thickness. When the glaciers finally retreated from Eastern Ontario about 11,000 years ago they left behind ample evidence of their former presence in Lanark County including eskers, glacial till, glacial striae and glacial erratics.

One of the best places in Lanark County to see evidence of the glaciers is in the Township of Lanark Highlands, particularly along County Road 12 from Playfairville to McDonalds Corners, and along Highland Line, a road off County Road 12 that takes one to Wheelers Pancake House, Sugar Bush and Maple Syrup Museum. At least four commercial sand pits are visible when driving along County Road 12 and Highland Line. The sand in these deposits was left by the glaciers, probably as eskers and fluvioglacial deposits. Also of interest are the glacial erratics that are strewn around the countryside. The hiking trails at Wheelers, which are open year round, provide ample opportunities to view the glacial erratics. The hiking trail that starts directly behind Wheelers Maple Heritage Museum exhibits hundreds of rounded erratics, many in the order of a meter in diameter. However, the largest erratics can be found adjacent to the road into Wheelers. The photographs below show some of the bigger erratics. The person in the photographs is just under five feet (1.5 meters) tall. 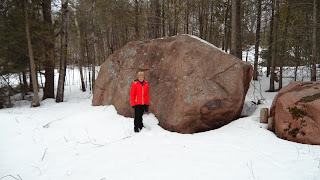 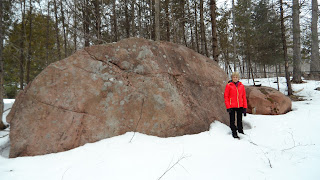 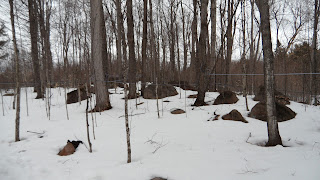 The restaurant at Wheelers, the Maple Heritage Museum, a second Museum displaying Vern Wheeler’s collection of over 300 ‘antique’ chainsaws, and the hiking trails are all open year round, seven days a week, from 9 am to 3 pm. 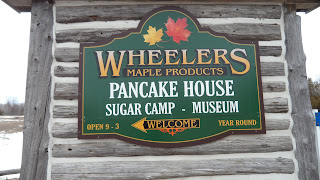 Wheelers is worth a visit just for the pancakes and maple sausage. It’s worth visiting to see the two museums. It’s worth a visit if you like to hike (particularly in the fall when the leaves are changing colour). And it is worth a visit if you are interested in glacial erratics and glacial deposits. There is no doubt that the best time to visit Wheeler’s is when the sap is running in the spring, and maple syrup is being made. I think you’d be hard pressed to find someone in Lanark County who has not been to Wheelers for a pancake breakfast. However, the best time to see the glacial erratics is after the snow has melted.

Here is a link to Wheelers: http://www.wheelersmaple.com/


The surficial geology of much of Lanark County was mapped by the Geological Survey of Canada a little over two decades ago. The sand deposits around Wheelers were mapped as glacialfluvial deposits (stratified sediments deposited at or near the glacier margin by meltwater streams). Below are extracts from two maps of the surficial geology issued in 1992 by the Geological Survey of Canada. The first extract shows the surficial geology along County Road 12 running from Playfairville to McDonalds Corners (which is off the left hand margin of the first extract) . The esker that appears on the map as a row of chevrons can be seen from the road. The second extract is to the west of the first and shows the continuation of the esker south of County Road 12 and running roughly following Highland Line towards Wheelers (which is marked on the map with a "W" in a white box). 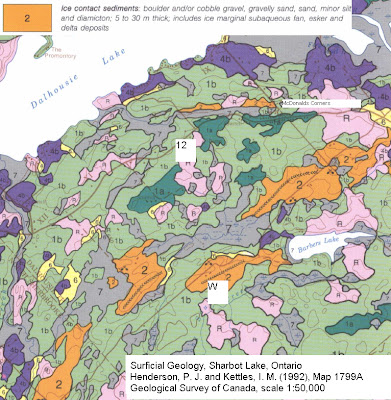 On the maps the Unit R (light pink) is Precambrian Rock; Unit 1a (dark green) is a Glacial till blanket; Unit 1b (light green) is a Glacial Till Veneer; Unit 4b (dark purple) is Littoral and Nearshore Glaciolacustrine Deposits (gravel, sand, clay); and Unit 7 (grey) is Organic deposits (i.e., muck, peat, bogs, fens, swamp).


Download Sites for Maps
If anyone is interested in looking at the whole of the maps, they can be downloaded free of charge from the Geological Survey of Canada Web site.

Anyone wanting to look at the maps as an overlay on Google Earth should consult:
http://www.ontario.ca/rural-and-north/surficial-geology-southern-ontario
Surficial Geology of Southern Ontario
This provides a layer on Google Earth which depicts the distribution and characteristics of surficial deposits across southern Ontario.