Cylindrical sandstone structures that cut across the bedding in Potsdam Group sandstones in Eastern Ontario at locations north of Kingston have been written about by geologists for over one hundred years.   Two of the earliest reports were written by T.C. Weston of the Geological Survey of Canada and report the results of his visit in 1888 to the locality, a quarry about twelve miles north of Kingston on the east bank of Cataraqui River four miles above the locks of the Rideau Canal at Kingston Mills.   The two references are:

“During this year, 1888, much discussion prevailed concerning the discovery of supposed fossil trees, many examples of which are seen in the Cambrian (Potsdam) formation on the banks of the Rideau Canal, Kingston, Ont.   The attention of the director of the Canadian Geological Survey [Dr. Selwyn] was drawn to these singular forms; he visited the locality and caused a section of one measuring four feet in diameter to  be sent to the museum in Ottawa.

On the director's return I was requested to visit the locality, and on the 16th of October, accompanied by Mr. Topley, the Government photographer, we started, and on arriving at Kingston found several people much interested in the discovery of these so called “fossil trees." In a shop window we saw a section of one labelled “Section of a stone tree." Hiring a team we drove through the historical city of Kingston.  Our twelve mile drive to the celebrated quarry where these so-called fossil trees occur was a pleasant one.

We found quite a number of these cylindrical forms, some examples would weigh many tons;  some of the weathered sections show irregular concentric rings which resemble somewhat the lines of growth in exogen plants. No fossil trees have yet been discovered in the Cambrian formation to which these deposits belong, and the conclusion arrived at was that these tree-like bodies are of concretionary structure, formed probably in geyser cavities. The "potato-stones" found in these sandstones are nodules, formed of the same material which composes these rocks.  The photographs taken at this interesting locality are the property of the Geological Survey and can be seen at that institution.”

Two drawings of the cylindrical structures were provided in Weston (1895).  The first is provided below. 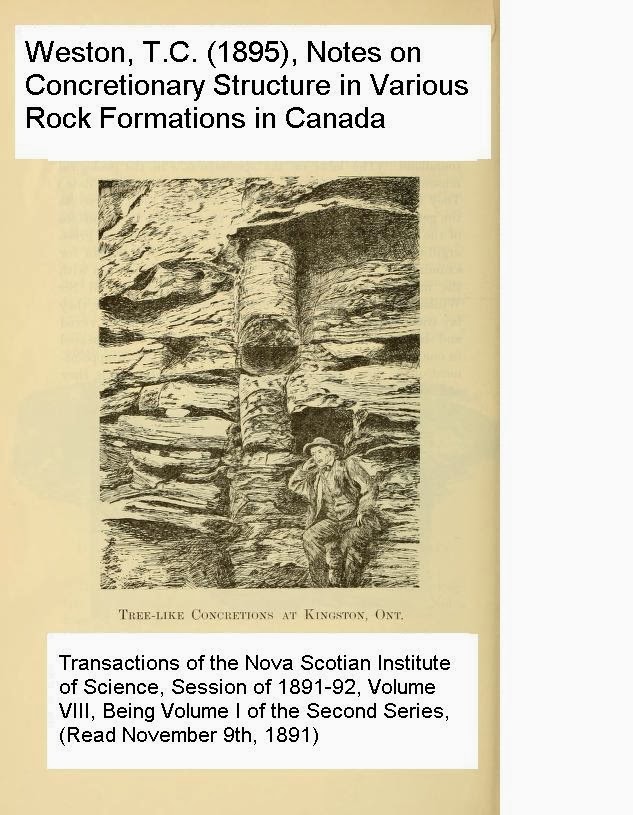 Below is a photograph of the same outcrop  provided in a guidebook published in 1913 that was prepared by M. B. Baker [Baker, M.B. (1913), Excursion A9 - Mineral Deposits Near Kingston, Excursions in the Eastern Townships of Quebec and the Eastern Part of Ontario, Guide Book No. 2,  12th International Geological Conference in Canada 1913] 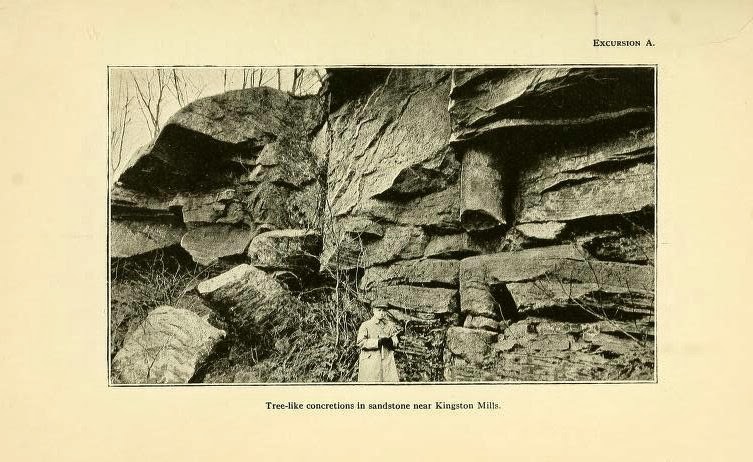 (1) the photographs that are Figure 40  in B.V. Sanford and R.W.C. Arnott (2010), Stratigraphic and structural framework of the Potsdam Group in eastern Ontario, western Quebec and northern New York State, GSC Bulletin 597

(2) the photograph of Site E15 at Let’s Rock,
http://planetrocks.ca/e15-geologic-columns-tracking-weird-structures-in-the-potsdam-sandstone/

The second drawing of the cylindrical structures from  Weston (1895) is a  weathered cross-section showing well defined concentric rings.

William James Topley (1845 - 1930), the photographer that accompanied T.C. Weston to look at the “fossil trees”, was one of the most important photographers in Canada in the late 1800's.    Over 150,000 of Topley’s negatives and photographs are in the collection of Archives Canada.   Unfortunately, it is not presently possible to search the whole of the collection online, and I could not locate his original photographs of the cylindrical structures in the archives.

I may have found one of Topley’s photographs in the following publication of the New York State Museum:  Cushing, H. P., Fairchild, H.L, Ruedemann, R. And Smyth, C.H. Jr. (1910), Geology of the Thousand Islands Region, New York State Museum Bulletin 145.  Plate 13 of that publication contains two photographs from the Gildersleeve quarry.  The right hand photograph was taken by Dr. H. M. Ami of the Geological Survey of Canada.  The left hand photo is credited simply to the Geological Survey of Canada, and may be one of Topley’s.   The photos of the cylindrical structures from Ontario  were included “because, while corresponding precisely to the New York State examples, it furnishes a much better illustration than any there seen.” 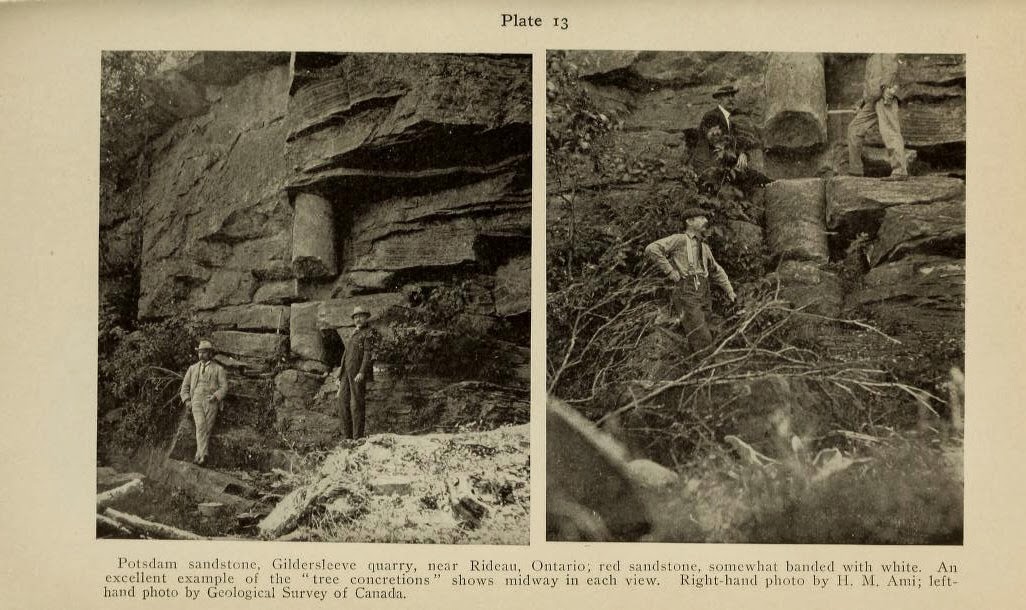 Theories for The Origin of the Cylindrical Structures

There have been many theories proposed to explain the origin of the cylindrical structures.   The weight of authority currently favours dewatering processes, but numerous other theories have been advanced over the years.   Sixty-one years ago R. V. Dietrich, in a report on similar structures in the Potsdam Sandstone of New York State,  summarized the prevailing views as follows:

“Similar structures in the Potsdam sandstone of this region have been previously described and interpreted to represent concretions, concretionary structures formed in geyser cavities, sediments deposited in whirlpools in potholes, and typical flat-lying Potsdam sandstone in which the original pigmentation was modified by the rising of springs through the unconsolidated Potsdam sand, the affected areas subsequently undergoing concretionary cementation.
...
[Sir William Dawson] (1889) suggested that the structures in the Potsdam sandstone in the Ontario-New York area represent concretions that formed around organic cores.   Weston (1899) suggested that the structures are concretions formed in geyser cavities.  Ells (1905) referred to the structures as cylindrical concretions, but offered no explanation for their shape or origin. W.G. Miller (1906) and Cushing (1910) concurred with the connotation, concretion, and also refrained from giving a generic discussion.  Baker (1916) suggested that they represent sediments deposited by whirlpools or other edying water in potholes.  Hawley and Hart (1934) ... concluded that they “...are considered to have formed during, or after, deposition of sand, but before final cementation.  The concentric, cylindrical color banding is believed to be concretionary in nature, localized by the presence of vertical cylinders of uncemented and not excessively disturbed sand.  The formation of these is attributed to the actions of currents of water, rising vertically through the strata from, possibly, a buried fault line or other controlling structure...”.”

A more recent summary of the differing views for their origin can be found in B.V. Sanford and R.W.C. Arnott (2010), Stratigraphic and structural framework of the Potsdam Group in eastern Ontario, western Quebec and northern New York State, GSC Bulletin 597, at page 41, where they comment:

“The origin of these structures has been the subject of speculation for a great many years, and the controversy likely will not be settled until such time as one of the columns can be dismantled at its base to determine whether it originated from the bottom or top. ... The origin of these structures... has been attributed to fossil tree trunks, potholes excavated and later infilled with sand, concretions, collapse or local slumping of sand into cavities in underlying Precambrian marble, and dewatering processes.  As proposed by Sanford (2007), a logical explanation for the origin of the columns is that of potholes later infilled with sand, as a fair amount of evidence suggests that they were drilled from the top down by rotating quartzite cobbles caught up in vortices on the floor of high energy systems, much like the motion of a diamond bit drilling into bedrock.”

That suggestion notwithstanding, the majority of recent commentators favour dewatering processes.


Locations in Ontario Where the Cylindrical Structures Have Been Found

Cylindrical sandstone structures that cut across the bedding in Potsdam Group sandstones in Eastern Ontario have been found at three quarries to the north of Kingston and Gananoque, namely:

C) the Ellisville quarry at Ellisville, Ontario, Lots 19 and 20, Concession VII,  Rear of Leeds and Lansdowne Township, United Counties of Leeds and Grenville.

Similar structures have been reported in two cliffs in lots 21 and 22 , Concession X of Storrington Township, “on the sandstone tongue, along which the road runs, at the north side of Dog Lake” (Baker, M.B. (1916), The Geology of Kingston and Vicinity, Ontario Bureau of Mines, Vol. XXV., Part III, No. 4, page 19).

Dawson (1890) also reports that “Many years ago specimens were obtained from the Potsdam Sandstone of Ontario, by the late Sir William Logan, which presented the aspect of large cylindrical trunks, a foot or more in diameter. ... showing obscure concentric lines on the ends.  No opinion was, I believe hazarded at that time respecting their origin...”   I have not been able to determine where in Ontario Logan obtained those specimens.

I’ve been told by two geologists that they are also present in the sandstone around Charleston Lake.

I have not yet found a similar structure in the Potsdam Group sandstones close to Perth, but I'll keep looking.

Forsyth, D.A. and Forsyth, M.E., 2011,
Pillars in the Park,
GAC/AGC - MAC/AMC - SEG - SGA  Joint Annual Meeting, Ottawa 2011, Abstracts Volume 34, at page 66
They report on “sandstone cylinders or pillars” in Charleston Lake Provincial, noting that “At least 8 cylinder sites are hosted by the sandstone plateau in the Provincial Park. These “water escape” features in the form of cylinders or pillars may be the lithified remains  of water table spring conduits that developed in response to water flow through very clean and well sorted sand overlying undulating Precambrian surface topography. Various cylinder forms resemble active, lithified and unconsolidated structures reported  from the USA and the Himalayas as well as some reported from more recent glacial sand deposits in Quebec.” ]

Posted by Christopher Brett at 11:54