A distinctive purple-banded sandstone is featured in many residences and public buildings in Perth and in Lanark County that were constructed in the 1800's and in a few buildings constructed up until the mid-1900's. This sandstone is often referred to as the "Perth stone". The characteristic feature of this stone is broad bands of purplish hue which vary from narrow lines to 25 cm (10 inches) in thickness. In some cases the entire dressed stone shows the purplish hue, while in other cases the stone has a purple banded part and a white top. In some cases the entire walls of a building have been constructed of Perth stone. In other cases the Perth stone has been used as accents or trimmings surrounding windows and doors, or as the base of a wall, while a white sandstone has been used for the remainder of the wall. The Perth stone was used because of its distinctive purple-banding, but also because it was readily cut and could be quarried in large blocks. Walking around Perth one can see some very large blocks of the Perth stone that have been used as lintels above windows and doors, as door sills, as foundation stones, topping stone fences, and as stairs.

Good examples of the Perth stone can be seen in Perth in the walls of the Methodist church on Gore Street, the Royal Bank Building on Gore Street, Mr. Code’s residence on Herriott Street (opposite Code’s Mill), a house at the corner of Drummond Street and North Street, a house at the end of Inverness Avenue (likely constructed only about 50 years ago), and The House of Industry for Lanark County erected in 1902 (now the Perth Community Care Centre) at 101 Christie Lake Road.  Perth stone was also used as the foundation of the Perth Carnegie Library (now the McMillan Building, 77 Gore Street East, Perth).   In Lanark County the Perth stone can be found as the outer walls of stone farmhouses on Elm Grove Road and Scotch Line and as the outer walls of the century old post offices in Smiths Falls (corner of Russell St. East and Market Street), Almonte (73 Mill Street) and Arnprior (35 Madawaska Street, now the Arnprior and District Museum).   The three Post Offices were designed by Thomas Fuller, Canada's Chief Dominion Architect from 1881 to 1896 and earlier a member of the firm of architects that had designed the Centre Block and Parliamentary Library of Canada's Parliament Buildings.  The former Almonte Post Office is a National Historic Site of Canada.

Below are three photographs of the house on Inverness Avenue. 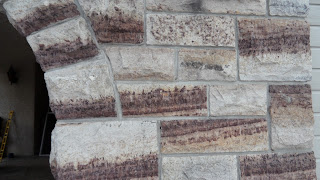 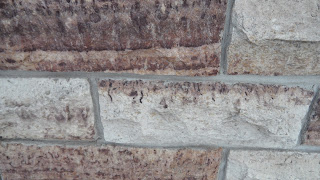 Below is a photograph showing Perth stone used as trimmings for Mr. Code's residence on Herriott Street. 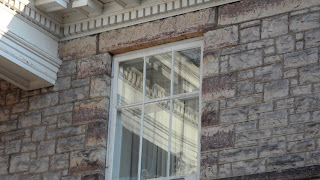 Below are photographs of the house at the corner of Drummond Street and North Street. 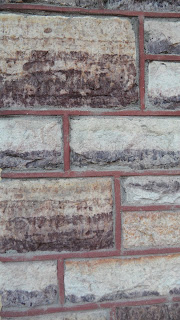 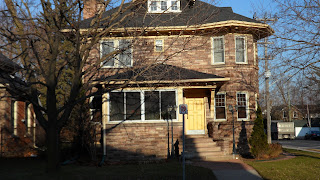 The Perth Stone sandstone is part of the Potsdam Group sandstones, and has been mapped most recently as Nepean Sandstone. The colour purple is likely due to the iron staining in the cement binding the quartz grains in the sandstone, and reveals burrowing in sediment that became the sandstone.

The Hughes quarry is described in two publications:

(A) Building Stones of Ontario, Part 1V, Sandstone, by D.F. Hewitt, Industrial Mineral Report No. 17, 1964, Ontario Department of Mines, and
(B) Report on the Building and Ornamental Stones of Canada , Vol. I, by William A. Parks, Mines Branch Report No. 100, 1912

Both are available for download as pdf documents free of charge on the web.

"There are two quarries operated intermittently on the Hughes property in lot 26, concession VII, North Elmsley township, Lanark County. In one opening there is 2 to 4 feet of thin bedded, medium-grained grey and purple mottled Potsdam sandstone. Random flagstone 2 to 3 inches thick is the principal production. A second quarry 1/4 mile south of the road exposes 3 to 4 feet of medium bedded, even bedded, grey and purple mottled Potsdam sandstone in 8 to 10 inch beds. These beds are used for ashlar building stone. There is some rusty mottling in the sandstone. Describing the stone from this quarry Parks (1912, p.129) says that "the characteristic feature of the colour of this stone is the broad bands of purplish hue which vary from narrow lines to 8 or 10 inches in thickness. Much of the intermediate material is of a yellow colour fading to white. The physical properties of the stone are as follows:
Specific gravity 2.65
Weight per cubic foot, Ibs. 150.38
Pore space, percent 8.97
Crushing strength, Ibs. per square inch 15459.
Transverse strength, Ibs. per square inch 417."

William A. Parks (1912) described the Hughes Quarry as follows:

"On this property the valuable stone occurs on a knoll overlooking a small lake and is exposed over an area of about 50 acres. In descending order the sequence of beds is as follows: —
12 to 18 inches — Purple-banded stone with three inch white top — 229.
10 inches — Purple-banded stone — 228.
4 inches — Soft, white stone with brown spots — 230.
Beneath is a hard, flinty type of white sandstone with brown spots and checks and with a tendency to break in a direction inclined to the bedding. All the beds dip westward at a low angle and pass under a heavy overburden, beneath which it is possible that more of the good stone may be obtained. This purple stone is unique, and is described in detail below.
The stone: No. 228. — The characteristic feature of the colour of this stone is the broad bands of purplish hue which vary from narrow lines to 8 or 10 inches in thickness. ... Much of the intermediate material is of a yellow colour fading to white. A general idea of the stone may be obtained by imagining bands of a darker purple ... alternating with bands [of a yellow colour fading to white], and fading into a yellowish white. Under the microscope the stone presents a mosaic of small quartz grains, seldom more than 1/4 mm. in diameter, closely apposed, and with a minimum of ferruginous and argillaceous cement. It is entirely to this cement that the rock owes its characteristic colour.
... From this quarry some very large blocks of stone have been obtained — one 30 feet long, 2 feet wide and 18 inches thick is said to have been quarried. Unfortunately most of the good stone has been removed, and, unless prospecting down the hill reveals a further supply, the purple stone is practically exhausted. The practice in quarrying was to break the stone with wedges,  very little powder having been employed. With the bedding, the stone breaks freely, and across the beds a good uniform break is obtained by lining and striking with a hammer. Much valuable stone was destroyed and the regular development of a quarry hindered by allowing contractors to quarry their own stone; in consequence of this, the exposure was picked over and no proper quarry ever opened. Contractors paid the owners $2 per cord for the privilege of operating. The following list indicates the prices obtained for the stone at the quarry: —
Sills, 40 cents per running foot.
Lintels, 40 to 50 cents per running foot.
Door sills, 60 cents per running foot."

The Hughes quarry is on land still owned by the Hughes family. I was lucky to be given a tour of the property in late November by Alan Hughes, and was shown both the former flagstone quarry, and the quarry that was most recently the source for the Perth Stone. While there is no output at present there is abundant Perth stone that could be quarried. Below are photographs of the quarry.

The outcrop is up to two feet high and extends about 20 meters along Elm Grove Road. One thin band in the outcrop could have a high calcareous content, as it is dissolving.